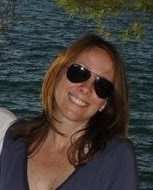 I’m originally from Orange County, but consider San Francisco my home. While I left behind great friends, an apartment I loved, and the ability to express myself fluently, I did not leave my heart. I actually found it there in the form of a Frenchman named Frédéric. We met in November 2001, the evening of the Leonid Meteor shower at a house-warming party in Hayes Valley. Standing on a roof-top watching the stars fall, Fred offered me his jacket and I accepted even though I wasn't cold. 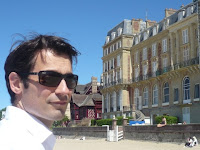 Eventually we moved, along with our cat Bilbo, to France so I could experience Fred’s culture and learn his language (which I sadly discovered could not be done by consuming French wine and cheese alone). We’ve been living in Paris since late 2005 and I’m still working on my goals, although they’ve now evolved to improving my French and trying to understand his culture. 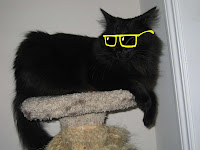 I do recognize, however, that moving from SF to Paris was less of a culture shock than moving from OC to SF. In an ideal world, we’d split our time between the two cities - but keep our French healthcare and vacation!
Please follow the link to learn The Top Ten Reasons Why You Should be Embarrassed to Know Me.