One of the disadvantages of city living is the lack of space. Growing up in , we had a two car garage in which to store old yearbooks, tools, and Christmas decorations. In , we have caves. In addition to the foregoing, we also use them to store winter clothes (something not needed in sunny ), moving boxes (because either you or one of your friends will eventually need those precious pieces of cardboard again) and finally the blow-up mattress for visitors (when your home is turned into a B&B).
Some Parisians don't even have access to their caves. Garage sales not being the norm in , landlords are sometimes reluctant to part with that wee bit of storage when they rent out their apartments. Fortunately, we do have a cave and most of the time I'm really grateful for the extra space, except when something like this happens: 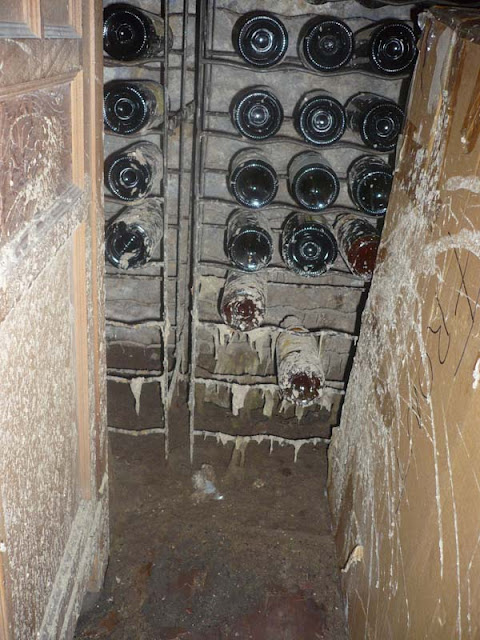 I recently went down to get a few bottles of wine for a dinner party and was shocked to find them, as well as a few other negligible items like a computer and armoire, covered in mud - an odd smelling mud. The guardian of our building informed me that the main evacuation pipe (for les toilettes) had been clogged. When it was unplugged, a leak ensued. He concluded that was the source of the mud explosion. In sum, our belongings were coated in a cocktail of my neighbors’ urine and fecal matter. And probably some of ours too, but that was more tolerable. I was fine changing my niece's baby diaper, she's family. But the thought of changing the collective diaper of my 16 unit building made me want my mommy. Or at least my husband!

I had a real dilemma on my hands (ewwww!). Either act like an adult and clean it up myself or pretend like nothing happened and send Fred down to get the wine when he got home from work. In the interim, I would practice my surprised face for when he returned to inform me that our cave had been turned into a septic tank. As a teenager I would always leave one bite of leftovers in the Tupperware so I wouldn't have to clean it. Thus, I wasn't surprised to find myself leaning towards option two. However, there were two problems with this plan: (1) the guardian could place me at the scene; and (2) the bottles needed time to chill before our guests arrived.

In the end, I decided I couldn't wait for Fred. I put on some rubber gloves and washed, scrubbed and doused the bottles in alcohol myself. The judging eyes of my French guests as I poured them a glass of white wine over ice cubes seemed far worse than having to handle human excrement.
Posted by Amy75 at 11:04 AM 14 comments: