Yesterday the sun was shining in Paris. It had been a long time and it inspired me to bring my camera along for our afternoon walk so I could document the city's beauty. However, after exiting our apartment and walking just a few paces, I got another idea. Why not document the dog shit on the streets of Paris instead? At the end of the day, I could bundle them all together in a lovely diaporama and email them to Monsieur Bertrand Delanoë, our city's mayor.

We had only walked 300 yards and already we had been forced to stop 3 times so I could take my photos - roughly 1 photo every 300 feet. I quickly became bored of my "assignment" after realizing just how much work it was going to be. Honestly, people: if you can bend over to feed your dog, and you're obviously feeding it, you can bend over to pick up after it! 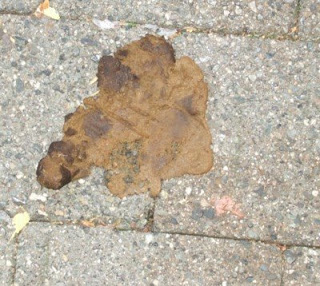 Later that night, by chance, I read an article that reported "65% of Parisians are very or rather satisfied with the cleanliness of their quarter"

Really? I must have been in the garden hosing off of my shoe when the pollster came knocking.

In reality, I'm extremely impressed with the maintenance crews in Paris, as is Willie Brown for what it's worth. They're out in force each day cleaning up after lazy Parsians (and their dogs)! In addition to the aforementioned dog droppings, people litter shamelessly here. It's astounding how often I see people drop trash on the sidewalk or dig into their pockets to discover an old candy wrapper which is then unceremoniously tossed to the ground. Fred recently asked a businessman why he intentionally threw his dirty Kleenex on the pavement when a trashcan was LITERALLY within an arms reach and he had to stand on the corner and WAIT for the light to change before he could cross the street anyway. He responded with a hurl of insults. And I once saw a mother grab and scold her toddler for bad behavior while she reached in her coat pocket with her free hand and unloaded a wad of paper into the air.

The fine for littering or not cleaning up after your dog here is 183 euros. Of course, I've never actually seen anyone receive a ticket. Perhaps the mayor could reassign half of the city's cleaning crew to issue tickets. The prevention-based model seems to work well for their healthcare system.

I will say this for Paris: when you see shit on the ground you know it's from a dog. After my last trip through the Tenderloin, I can’t confidently say that about San Francisco. While, in general, it is looked down upon to openly litter in the US, I was utterly digusted (gag reflex disgusted) by the filth in parts of the city. I spent 10 years there so you'd think I'd be used to it. So, either it has gotten worse, or my standards have gotten higher from living in Paris - which isn't saying much given my tirade above.
Posted by Amy75 at 8:43 AM 8 comments: